Amazon recently announced the development of a 1M square foot fulfillment centre in the Edmonton International Corridor. The announcement has created a massive economic ripple South of Edmonton that continues to grow as people plan for bright futures in the area.

Already popular as a destination for local and international businesses, people are now flooding to the Corridor to take advantage of limited residential investment prospects. Property prices will soon skyrocket, but for now, there’s a narrow window of opportunity for investors to make pro-active ventures in real estate and luxury properties.

The announcement from Amazon comes on the heels of other major investments in the region that have had their own ripple effects. Ford Motors recently opened a major distribution centre, and Aurora Cannabis, one of the top three cannabis producers in Canada, built a massive greenhouse that’s now operational.

On its own, Amazon’s announcement sparked a new economic surge south of the city, but compounded with these other investments, it’s setting the region up for unprecedented growth. Real estate investors are set to benefit the most from capitalizing now, before the market becomes flooded with interest in the few properties remaining in nearby communities like Royal Oaks.

At Cancom, we’re already feeling the demand growing for housing and properties with the announcement from Amazon. Investors are seeking out pro-active investment opportunities in the Leduc region while property values remain stable and incentives for investment remain in place. For example, the popular Buy Now, Pay in 2020 offer for Royal Oaks properties allows investors to capitalize on the timing of growth in the residential real estate market. Amazon’s fulfillment centre is also set to open in 2020. As of now, only a few premium lots remain on the market in Royal Oaks, with those expected to be sold within a few months as interest in the region grows.

Supply and demand in the real estate market is also being affected by Amazon’s announcement. With big business comes big population blooms. About 700 workers will be needed to complete the construction of the project, with an additional 600 jobs being created permanently at the warehouse once completed. As the Leduc’s economic expansion and job creation continues, more and more people are flocking to the region for jobs, and, of course, for premium quality housing.

According to Western Investor: “Leduc’s population growth is among the highest in Alberta, posting a 23.4 percent increase from 2011 to 2016.” This has led to a major demand for residential real estate and quick possession homes already on the market. Those who see the returns on new development properties are those who won’t just join the economic boom, but profit from it.

The options for residential investors are becoming more limited each day. Currently, Royal Oaks is the only community that sits directly amidst the development. The planned Amazon fulfillment centre in Border Business Park is just a few minutes away. While the Royal Oaks community has created incredible opportunities for investors, we expect the upcoming development of the Roxdale Village community come to fruition in a highly competitive market.

A Warm Welcome to Amazon

Cancom Development warmly welcomes Amazon as our newest neighbours. With the Royal Oaks community as the closest neighbourhood to the centre, we’ve already been feeling the effects of Amazon’s investment in the community and the surrounding areas. Demand for housing in the region is intensifying, which spells good things for businesses and the community as a whole.

Amazon has also received a warm welcome from local and provincial stakeholders. Rachel Notley, Alberta’s premier, as well as local business owners, politicians, and developers, have all chimed in with a positive outlook on what’s to come now that Amazon is coming to town.

Case Study: What Amazon Means for the Community

So, with Amazon coming to town, what can we expect for 2020?

NBC News spoke to the ripple effect underway in Tracy, California, following the opening of an Amazon fulfillment centre in what was previously described asa “sleepy little town.”

The results of Amazon’s investment in the town in 2014 were described by Robert Rickman, Tracy’s mayor:

In Alberta, the trial results are similar. Amazon’s recent investment in the small south Albertan community of Balzac (near Calgary) has made a major impact on that community. In addition to the creation of thousands of jobs over the next few months, Amazon made a $10,000 donation to a local charity to mark the opening of the fulfilment centre. The company isn’t just making massive contributions to the local economy, but specifically investing in the community to make life better for residents.

Within minutes of the new fulfillment centre, the Royal Oaks community and our residents are already set to benefit from the economic ripples happening there. Economic investment in the area means skyrocketing property and housing prices in the years to come.

Amazon’s Ripple Effect in the Corridor

Businesses and real estate investors are closely following the developments in the area, particularly as opportunities to stake a claim in the Royal Oaks community quickly come to a close. There are only a few lots left under the Buy Now, Pay in 2020 promotion, and after that, investors will need to wait for the pre-sale for Roxdale Village lots before they can find another location in a centrally-located master-planned community. These are currently the only two master-planned communities in close proximity to the economic ripples occurring in the Edmonton International Corridor.

For more information about Royal Oaks and the Buy Now, Pay in 2020 promotion, and to find out how much your property could be worth after recent investments in the area settle, call Cancom to speak to one of our real estate experts. 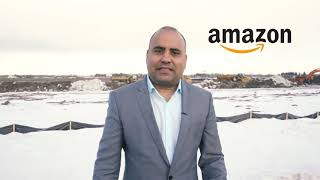 What Does the Commercial Vacancy Rate Mean for Investors in Edmonton?

What Is Cap Rate and How Do You Calculate It?

How Commercial Real Estate Builds Pays for Itself & More